This is the first of a two-part post on glass, and in particular on the way in which light interacts with it. In this first instalment I’ll attempt to cover some glass basics: what glass is, its transparency, the way light behaves as it passes through and how one can introduce colours. Hopefully, this prepares the way for a closer look at stained glass in the second chapter and at a specific, Victorian, example of the sort of issues faced by conservators of Canterbury Cathedral’s stained glass windows.

Rather than spend a lot of time reiterating what I, and others, have written or spoken on in the past regarding what glass is, I’ll offer a brief description and then a couple of links to previous posts and videos. You can choose how wide-ranging you want to go, or how deep you’d like to dig – and by the same token, how long you want to spend on the topic. Perhaps the easiest place to start is via the assumption that most of us are familiar with what a crystal looks like. Even if you don’t have large diamonds or sapphires kicking around the place, you’ll have perhaps seen a crystal of quartz, or even grown salt or other crystals whilst at school. The one thing they have in common is the regularity of their respective shapes: all salt crystals are cubic, natural (i.e. uncut or polished) diamonds are, well, diamond-shaped and so on. The shape they display to us arises directly from the equally regular arrangement of their constituent atoms. Thus, the atoms in a quartz crystal – atoms of silicon and twice as many of oxygen – are also arranged regularly as though on an ever-repeating lattice. In this case however the atoms are arranged in a pyramid-like fashion (shown in the four-part figure below), which gives quartz crystals their characteristic shape. This provides for us a bridge into understanding glass, since the prototypical glass, silica, on which all our windows, bottles etc. are based, has an identical chemical composition to quartz: two oxygen atoms for each silicon atom. Just as in quartz, the atoms are in a pyramidal arrangement with their nearest neighbours – but the key difference is that silica typically solidifies too fast for the atoms to arrange themselves perfectly in 3D: the angles (and distances) vary just a little from one group of atoms to another. This addition of a small degree of disorder is enough to rob the material of any semblance of the regular facets observed with a crystal.


Should you wish to read beyond this basic description I have written about glass, in its several guises, in several former posts, but this one is perhaps the most relevant; move on to this post if you would like learn something of the ‘human factor’ within scientific research into such materials. On the other hand, if you’d prefer to sit back and watch a video presentation on the subject, then look no further than the recording of a public lecture I delivered a few years ago in one of my local museums. The video is approximately 58 minutes long, although the introductory material is confined to the first eight minutes or so.

Having established the basics, and keeping in sight the target of understanding the way in which light is altered as it passes through glass – and coloured glass in particular – one ought first to tackle the matter of glass ‘transparency’. We tend to think of the windows in domestic and commercial buildings, windscreens, display screens etc. when we think about glass in the everyday. We can see through glass: it’s ‘transparent’ (see here for an excellent insight into why this might be). Indeed, the secret of the success of world-wide fibre optic communications resides in the exceptional transparency of the silica glass at its core, first demonstrated in the early 1970s by Donald Keck and co-workers. However, ‘ordinary’ glass isn’t perfectly transparent and might not be very transparent at all under certain circumstances. It all boils down to what sort of glass it is (its chemical composition, whether it includes bubbles, impurities & etc.) and what sort of ‘light’ we’re talking about. I have tried to illustrate this in the images below. The two images on the left show three types of glass: a common (soda-lime) glass typically used in windows, bottles etc. which sits inside a tube of Pyrex glass (a borosilicate) and which, in its turn, sits within the outer tube of pure silica. Viewed side on (left) the composite glass rod seems reasonably transparent, but when viewed end-on (middle image) so that we’re trying to look through a far greater thickness of glass it is obvious that the transparency varies a lot between glasses. Turning now to the diagram on the right, this illustrates the degree to which transparency, or the ability of the glass to transmit light, varies depending on what sort of light is involved. This simplistic diagram provides a representation of the situation with a car windscreen for example: of course we need a high level of light transmission for the visible part of the spectrum – the rainbow colours – but we don’t want a lot of infra-red or ultra-violet getting through as it’s preferable neither to overheat nor to get sunburnt; however, it is important that microwaves are able to pass through as our passengers may wish to use their mobile phones. The situation is very similar for window glass, and a great deal of research and development has gone into the formulation of glasses tailored to achieve these ends.
Having now introduced some of the caveats and subtleties behind apparently simple comments such as “glass is transparent” we ought also to mention the important ways in which even transparent glass affects light as it passes through. Key phenomena are refraction and dispersion, which allow us to fabricate lenses and use prisms as well as to explain why a swimming pool looks to be less deep than it really is and where a rainbow comes from. Refraction is the phenomenon by which light is ‘bent’ as it passes from one transparent medium to another, and dispersion tells us that the magnitude of such processes depends on the wavelength – the colour – of the light. I’ll not weigh this post down with a lot of detail since it would be a bit of a diversion from the principal thread. However, if you’d like to know more then please take a look at two of my earlier posts: one on the origin of rainbows (here) and another which illustrates theories of colour through the use of a prism (here).

The final stage of this first post in the pair brings us to the subject of coloured glass. The reason that window glass is reasonably transparent is explained very well at the atomic level in the video I recommended earlier (here): in essence, there are few mechanisms within the glass able to reduce the amount of light passing through. We can change and control that situation, and do so by design. What is needed is the introduction of small concentrations of one or more metals, each of which will offer at least one route by which light of a particular colour will be absorbed. Thus, adding a metal which absorbs light at the red end of the visible spectrum (i.e. from the ‘rainbow colours’) ensures that the light transmitted through the glass has no red within it. We have, in effect, coloured the glass. For example, to give a blue-coloured glass one could use cobalt, copper or ferrous iron; nickel, chromium or ferric iron would yield a yellow-looking glass. Moreover, one can play with the addition of more than one type of metal. For example, a glass containing both ferric and ferrous forms of iron would appear green since that mid-section of the visible light spectrum would be the only part not absorbed by one or the other forms of iron. In passing, I had the privilege of taking part in a project run by the Turner Contemporary Gallery a few years ago in which the topic of colour was explored by a local group of young people. This included a visit to the Glass Studio at Canterbury Cathedral to examine the artistic use of such coloured glasses; the video record of the project is here and my short voice-over on the scientific background to the colours of glass starts at about two minutes in.
In the next post we’ll focus on one aspect of the artistic and architectural use of coloured/stained glass, and on the conservation issues associated with old stained glass windows. In the meantime, I’ll leave you with this image of one of the many delightful pieces to come out of Peter Layton’s studios; this piece is from his Mirage series. 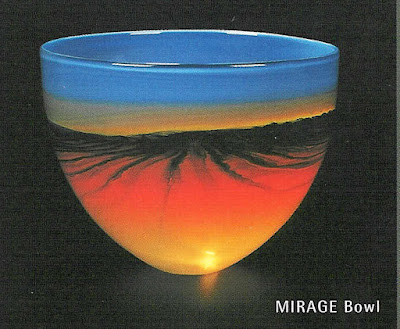 bobяeflected
By profession I'm into the physical sciences, with interests in teaching physics and using a range of approaches to study glass as a material. I'm also committed to public engagement: sharing my love of science with non-specialist audiences.